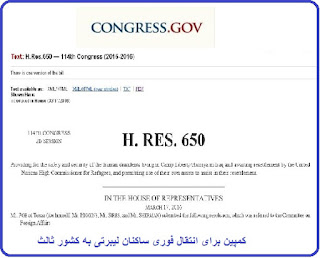 
H.Res.650 - Providing for the safety and security of the Iranian dissidents living in Camp Liberty/Hurriya in Iraq and awaiting resettlement by the United Nations High Commissioner for Refugees, and permitting use of their own assets to assist in their resettlement.114th Congress (2015-2016)

There is one version of the bill.

Whereas approximately 2,000 unarmed members of the Iranian opposition movement, the Mujahedin-e Khalq (MEK) reside in Camp Liberty/Hurriya awaiting resettlement by the United Nations High Commissioner for Refugees (UNHCR), which has recognized them as “persons of concern” and “in need of international protection”;

Whereas these residents oppose the clerical regime in Tehran and, as a result of that opposition, live in constant danger of attack from pro-Iranian forces;

Whereas these residents moved from the former Camp Ashraf to Camp Liberty/Hurriya, which is adjacent to the Baghdad International Airport, following a December 2011 Memorandum of Understanding reached between the United Nations and the Government of Iraq, and brokered by the Government of the United States, for the express purpose of resettling them as refugees to third countries;

Whereas in 2004, the United States recognized the residents as “protected persons” under the Fourth Geneva Convention and pledged to protect the residents until their final disposition;

Whereas the residents have come under attack several times since their relocation to Camp Liberty/Hurriya;

Whereas Iraqi forces who bear responsibility for guarding the camp have failed to protect its residents from repeated attacks;

Whereas most recently, during the evening of October 29, 2015, the residents of Camp Liberty came under rocket attack, with 80 missiles killing 24 residents and injuring dozens more;

Whereas Secretary of State John Kerry strongly condemned the October 29 attack, describing it as a “brutal, senseless terrorist attack”, and calling for “find[ing] the perpetrators and hold[ing] them accountable for the attack”;

Whereas the United Nations Secretary-General strongly condemned these attacks and called for the perpetrators to be brought to justice;

Whereas the UNHCR described the attacks as “most deplorable”;

Whereas 140 residents have died as a result of the attacks, 7 have been abducted, and more than 1,300 wounded;

Whereas groups affiliated with the Iranian regime’s Revolutionary Guard Qods Force have claimed responsibility for attacks and warned that more would follow if the residents did not leave Iraq;

Whereas Iraqi security forces are permanently stationed around Camp Liberty/Hurriya, despite their past violence against the unarmed residents;

Whereas the security of Camp Liberty/Hurriya is clearly inadequate to protect the residents from armed assault and rocket attack;

Whereas the residents are opposed to the development in Iran of a nuclear weapons capability and have provided valuable intelligence concerning efforts by the Government of Iran both to establish a nuclear weapons capability and to supply paramilitary groups in Iraq with Improvised Explosive Devices (IEDs) and Explosively Formed Projectiles (EFPs);

Whereas the United States Department of State in its August 29, 2012, statement stated, “The United States also reiterates its commitment to support the safety and security of the residents throughout the process of their relocation outside of Iraq”;

Whereas hundreds of the residents have been resettled to Europe;

Whereas the Government of Albania has generously resettled hundreds of residents from Camp Liberty/Hurriya in Iraq to Albania in demonstration of international solidarity in caring for a vulnerable population; and

Whereas the residents have been unable to access or sell their property remaining at Camp Ashraf for the purposes of supporting themselves or funding their resettlement: Now, therefore, be it